Ramón Piñango was named Professor Emeritus of the IESA 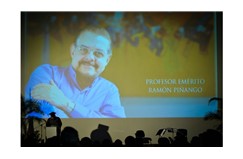 An example of solidarity and permanent collaboration with the development and success of his students and colleagues, a man enamored with, and concerned for his country, always looking towards the new generations and an active participant in the training of future generations, mentor to many -including Professors- and last but not least, an animal lover. This is Doctor Ramón Piñango, Professor Emeritus of the IESA.

Ramón Piñango was named Professor Emeritus of the IESA with the unanimous agreement of the institution´s council of Professors during a pleasant act which took place last Wednesday July 10 at the IESA´s Völlmer Auditorium.
The distinction of Professor Emeritus is awarded by education institutions to Professors who continue to be active and give classes and conduct research, after they retire from an outstanding academic trajectory.  This is the case of Ramón Piñango, Professor at the IESA for 34 years, since he started in 1979 and became a senior lecturer in 1988.
IESA authorities, members of the directors´ council and the executive board, employees, students, family members and friends were present at the act.
The inaugural words were pronounced by Doctor Gustavo Roosen, president of the IESA: "Ramón Piñango has demonstrated his permanent capacity for learning and adaptation. He is tenacious, self-critical and passionate in his job, and he seeks to transmit this spirit at the IESA as his parent organization. He is passionate about leadership, always a friend of becoming a member of groups that think and ponder; he is a person who seeks synergy and accomplishes this through permanent teamwork. Ramón is bent on promoting a type of leadership for these times, because he understands our problems, which are not problems for new men but for searching for ideas and discarding old habits”.
Read more about "Ramón Piñango was named Professor Emeritus of the IESA">>
Masters
Executive Education
Admission
Professors and Research
Alumni
Library
Editorial
About IESA
Follow Us