The Venezuelan economy in a global context 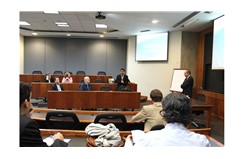 IESA's Academic Department organized a conference which included economist Francisco Rodríguez, who conversed with professors and entrepreneurs on Venezuelan politics and economics, and shared his impressions on the current situation in general.

Economist Francisco Rodríguez, a former professor at IESA, offered a conference entitled La economía venezolana. Retos, restricciones y oportunidades, (In English, The Venezuelan economy: Challenges, Restrictions and Opportunities) where he shared his points of view on the Venezuelan economy and politics during a two-hour session, in which professors of the institution and corporate leaders exchanged ideas last Tuesday November 12.

In his presentation, Rodríguez shared with the audience a recent research paper on the external accounts of Venezuela.  Rodríguez itemized what he classified as “distortions” in Venezuela, related to the following:

•    Energy-related agreements signed in previous years which, on the one hand, enter into loans granted at their nominal value and have not been adjusted to the market´s circumstances.
•    The bulky amount of accounts payable as per said agreements, which generate a divergence between the sums reported by PDVSA and the sums reported by the BCV.
•    The lack of available foreign currency to repatriate dividends and the fact that when these are paid, they are paid at the official exchange rate.
•    A significant use of cash advances for imports, which over-estimate what we see at present and what was paid years ago.

“Once these adjustments are taken into account, the external position turns out to be far worse than what is reflected in the official accounts, with deficits in the public sector higher than initially reported, and in which the current account (which shows the foreign balance after the transactions of goods and services, among other items) is marginally negative and evidences the shrinkage in the amount of available foreign currency, just barely above the sustainability levels proposed by the IMF”, Rodríguez explained.

Rodríguez underscored that, based on these calculations, the panorama for the second semester of 2013 would be better than what is shown in the official accounts given that certain adjustments have been made (in quantity but not in price) which have augmented, in his opinion, the capacity to pay the nation´s external commitments.

Later on, during the Q&A session with the audience, a discussion took place as to the possible direction of economic policies in Venezuela for the coming year 2014 and the implications thereof for the nation's economy.

Rodríguez has been a professor at Maryland University, College Park, Wesleyan University and IESA, as well as a guest researcher at Notre Dame University. He has published over fifty articles in specialized academic journals, including the American Economic Journal, Journal of Economic Growth, NBER Macroeconomics Annual, Economic Development and Cultural Change, Journal of Globalization and Development and Foreign Affairs.